How Not To Get Arrested and Detained By The Immigration Officer? 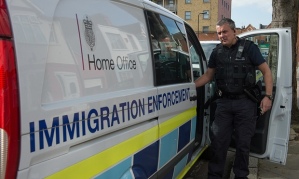 The Home Office has appointed CAPITA to become their arm in maintaining an effective immigration control. There are times that people will call us saying that they have received a text message or a letter from Capita telling them to go home. Upon receiving this kind of threatening messages, people get panicky and ask: “Ano po ang gagawin ko?”

The only way to avoid getting arrested and detained by the Immigration Office is to make an application to regularize your stay as there is no other way especially if you stayed beyond the validity of your visa. Make a visa application as soon as possible and don’t wait for them to arrest first.

I represented a case in a London English Court  where the Judge was saying:

“People think that they are exempted from getting arrested because nobody knows where they are. They don’t realise that one day it will come upon them that the police will come wherever they are because a warrant has been issued against them.”

Regularize Your Stay. Apply for a visa because that shows respect to the laws of the United Kingdom. There is nothing irritating to a Police Officer asking a person: “May I see your passport?” or “What is your immigration status?” and they the person will just say: “I have a relationship here?” or “I have my family” or “I will apply very soon…” as there answers are not acceptable.

Many other nationalities apply for a visa irregardless of the merits of their application because it gives them some time not to get arrested. Of course, it would be silly to apply and pay exorbitant amount of money for nothing but I have seen cases where the application has given them at least 1 to 3 years stay of not being arrested. I am not condoning this kind of practice but this is better than not doing anything and just hoping that “amnesty” will come one day.

I always advise people to be proactive in their immigration status. If they think that they have these, then it is possible to lodge an application to regularize their stay:

The following brief examples may give you some idea of the in-country legalization options.

Settlement for irregular migrants.  Please note that the 14 Year Rule for irregular migrants, which used to Settlement, was abolished on the 9th July 2012. Instead, people who have remained unlawfully (or initially lawfully and then – unlawfully) in the UK for 20 years may legalize their immigration status in the UK and, if approved, may be granted further leaves to remain in the UK (4 periods of 2.5 years each) totaling 10 years before such migrants may be able to apply for Settlement (ILR) in the UK. In simple language it is a shocking 30 year period before some migrants can be Settled in the UK.

Legacy Cases. If you entered the UK some 6+ year ago, claimed asylum and your case has not been decided yet, you may also qualify to remain in the UK  permanently on the basis of the so-called Legacy Cases.

Marriage to a European citizen. If you marry a European citizen, you may qualify to remain in the UK irrespective of your immigration status (valid visa, visa expired, overstayer, illegal entrant, failed asylum seeker etc).

Divorce from a European citizen. If you have been married to a European citizen for 3 or more years and both of your worked in the UK at least for 12 month, you can divorce your European spouse and retain your own right to remain in the UK.

Human Rights Cases. In some cases a person may be granted a leave to remain in the UK on the basis of certain Articles on Human Rights. Note that in most cases you will have to qualify and meet quite high threshold in order to be granted some sort of status in the UK.

It is very important the people respect the laws in this country. When you do, you can sleep well at night and do not worry about any knock on the door or noise outside. Apply for a visa to regularise your immigration status. It may fail, but if your case has merits, you may be lucky to be given the rights of appeal in the Court where you will be given the opportunity to be heard by an independent Judge at the Tribunal. Who knows? Your appeal could be allowed and the Home Office will be directed to issue you a visa. You will never get it when you never apply.